Compare to another person 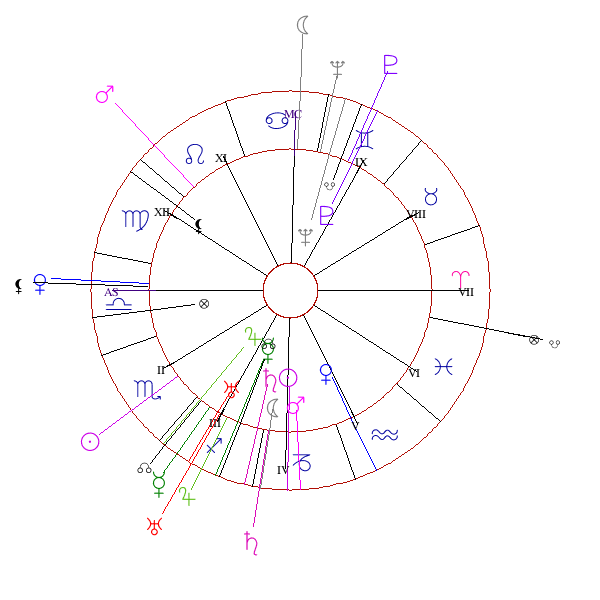 The following aspects between planets concern the possible relationships between two charts, especially the emotional and romantic relationship, but also aspects on social, intellectual, and spiritual levels.

The values next to the orbs in the chart above are part of a rating system. Keep in mind that these figures serve only as a possible guideline to reveal which aspects may be considered easy or challenging. Analysis of a relationship is, of course, very complex. While some aspects can be considered, on their own, difficult for most people, some will have an easier time with them, and the same is true of easy aspects. As well, all relationships will--and should-- have a mix of easy and challenging aspects.

When analyzing compatibility, always use your own logic and intuition to put these influences together. This is the case for anything you read in the report, on the site, on other sites, and in books. These are guidelines and possibilities only, and are not meant to pass judgment on a relationship. Read more about these combinations on Cafe Astrology (Synastry/Relationship Astrology category), on other astrology sites, and in astrology books.

Challenging aspect: The two persons are drawn towards each other, but the union can be unstable at times, largely because there will inevitably be division, probably through misunderstanding on romantic levels, which may frustrate the partner.

Positive aspect: An agreeable relationship overall. They generally like to speak with each other, have a good intellectual understanding, their tastes can be very similar or complementary, and they typically like to share their feelings with one another.

Positive aspect: Complete respect for each other's romantic style. They don't easily offend each other and instinctively understand what makes the other person happy. Conflicts arise, but they are generally smoothed over with ease, as there is good will between them. Very good aspect for a successful union. Love, gaiety, understanding.

Positive aspect: Few clouds in this couple's life, at least on an intellectual level. They have a good intellectual understanding, take pleasure in being together and in discussing and exchanging ideas. Together, they can come up with unique and creative ideas and solutions to problems.

Positive aspect: They are made for each other. They go well together, have intellectual understanding and confidence in each other, a harmonious couple.

Positive aspect: This union can be favorable, if the two mutually respect each other. They both like their independence, their freedom of thought and action. The relationship may be marked by distinct philosophical interests and unusual ideas or belief systems, which ideally are encouraged in one another. There can be a nice meeting of minds on the bigger issues.

Challenging aspect: Through your relationship, changes in your basic beliefs and personal philosophies are in store. The Pluto person may attempt to change the Jupiter person's belief system or way of viewing life, which can cause friction. Attempts to force one another's opinions on each other should be avoided in order to maintain harmony in this relationship.

Positive aspect: There is an ability to bring imagination and fantasy successfully to the relationship. While interactions can be hard to define at times, you help refine one another's outlook. There is an element of mystery that attracts you to one another. Some laziness might be stimulated between you, however.

Challenging aspect: While the Saturn person can help organize or direct the Neptune person, there may be some resentment.

Difficult aspect: A tendency to want to direct the partner's thoughts and ideas. Reading too much into what is said and what is not said. The Mercury person may not feel free to express his or her ideas, and can feel stifled intellectually by the Pluto person.


Back to Free Reports Home and list of your charts.

Back to Compatibility for Lovers (NO birth times) form.

Get a full Romantic Compatibility report.

Cafe Astrology offers detailed Astrology reports - birth chart, compatibility, romance, future forecasts, and more...Astrology reports. While not all birth locations are included in the free database, our software for paid reports is comprehensive.

Information in this program is for entertainment purposes only. Cafe Astrology is not responsible for how this information is used.